An introduction to Model drift in machine learning

Let’s imagine the following use case: I’ve built a model that tries to predict how much a person will spend in an online webshop, using the age and the gender of a person. The training data set mostly consists of females, with the average age of all customers being 35. The model learns that mostly older people and women buy something more often. After monitoring my model’s predictive performance, I notice that it’s starting to decrease… But why?

After doing some research I discovered that the webshop now has younger customers: the average age has dropped from 35 years to 25 years. Furthermore, the live data shows that currently not the women, but the men spend more believe it or not!

In general, there are two reasons why drift can occur in machine learning models.

What is data drift?

So, I mentioned previously that data drift occurs when the properties of the independent variables change, but what does this mean? It basically means that the distributions of the input data have changed. An example can be shown in the figure below, which represents the change in the distribution of (example) Feature 1 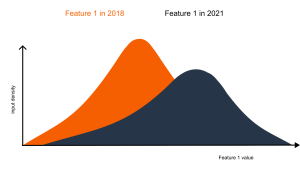 Let’s look back at the use case of the webshop I described at the beginning. As I said before, the training set consisted mostly of women, and all the users had an average age of 35 years. The model learned from the training set that it was mostly women and older people who spend more.

What is concept drift?

As explained before, concept drift occurs when the properties of the dependent variables change, i.e., the relationship between the input and output starts to change, the distribution of the input might even stay the same. The “concept” in concept drift is defined as the hidden and unknown relationship (the decision boundary) between the input and output variables. This is marked with a grey line in the leftmost graph below.

Mathematically concept drift can be explained as the change in distribution p(y|X), where X are the available features and y is the real label. Concept drift is usually the result of an external event, like COVID. The figure below shows a graph of sales predictions for a company that sells loungewear (source: EvidentlyAI). Notice that the model produced pretty accurate predictions before the lockdown was announced. Obviously, people spent a lot more time at home when the lockdown was announced. Which resulted in people ordering two sets (or more) of loungewear, where they would previously have only bought one set. i.e.

How fast does concept drift occur?

The rate at which concept drift can occur can differ, this mostly depends on the use case. Machine learning models that are used for quality checks in manufacturing processes are more stable than models that try to predict consumer behaviour. In general, there are four different rates at which drift can occur:

How to detect model drift

One little side note about the technique I just mentioned is that the “accuracy” of a model can be expressed in different Key Performance Indicators (KPI’s), it depends on the use case which one is best. There are four KPI’s that can be used to monitor a models performance:

There are two general ways of detecting model drift: a statistical approach and model-based approach. The statistical approach basically tries to calculate the difference between two populations. This can be done using multiple techniques like the Population Stability Index, the (Kullback-Leiber) KL divergence, the Jenson-Shannon (JS) divergence etc. explaining all these methods goes out of the scope for this article, but if you want to read more about it you can visit this site.

The model-based approach uses a model to determine the similarity between data point(s) to a reference baseline. This technique usually gives a more accurate result, but it is not a very intuitive approach and can therefore be difficult to explain how it works to others.

Detecting model drift is great, but what can be done after to let your model regain its predictive power? Just like with detecting model drift, there are two general methods. The first one is to prevent model drift from ever occurring. This can be done with online learning. With online learning, your model is constantly updated by a real-time data stream. While this technique is very effective, it is also more complex to implement than the second way described below.

The second way model drift can be addressed is by periodically retraining your model. This can happen either at a fixed interval or when the model’s performance drops under a certain threshold. You can also choose to take a representative subsample that has the same distribution as the live data and use that to re-label the data points.

The third way is by using ensemble learning with model weighting, which uses multiple models that are ensembled. These models produce a combined prediction, which is typically computed with a weighted average of all the individual predictions for each model.

The last one I want to briefly mention because it’s used a lot in the industry is feature dropping. Where, just as with ensemble learning, multiple models are built that use one feature at a time and keep the target variable unchanged. The AUC-ROC response is monitored for every model, and if the value of one of these graphs drops below a threshold, drift might have occurred.

Set up your monitoring plan. Identify model drift early on

There are also companies like Whylabs, Neptune, or Arize where you can upload your model and monitor the drift in real-time. In the past UbiOps have released three articles that explain how you can connect your UbiOps environment with a model monitoring tool: