Creating imports and exports is supported in the WebApp, the API, CLI and client libraries.

Deployments, pipelines and environment variables can be exported as a ZIP file. Multiple objects can be part of the same export.

When you want to use the WebApp to create an export, navigate to Imports & Exports in the sidebar. 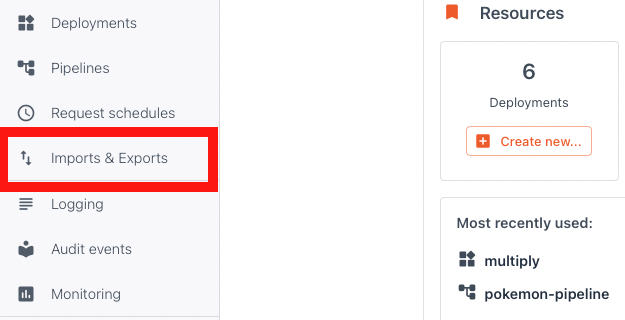 Then, switch to the Exports tab and click 'New export'. First, select all pipelines you want to include in your export (this step can be skipped). The deployments that are part of the selected pipelines are automatically selected in the second step where you can include deployments.

Include a deployment/pipeline by using the select box at the top. After selecting the object, the selected object will be displayed and its default version (if any) is automatically selected. You can add more versions by using the version select box, and remove versions by unchecking the checkbox in front of them.

Deployments, pipelines and environment variables can be imported from a ZIP file. You can upload a ZIP file or provide a link to a publicly accessible storage for UbiOps to retrieve it from. This can for instance be a publicly accessible Google or Amazon bucket. Make sure it's possible to download from the link without giving any credentials.

The structure of the ZIP file will be described below. Multiple objects can be part of the same import. After import creation, the objects found in the import file can be reviewed and confirmed before they are actually created. In this confirmation step, you could also provide missing environment variable values.

When you want to use the WebApp to create an import, navigate to Imports & Exports in the sidebar.

Then, click 'New import', upload a ZIP file containing the deployments and pipelines you want to import, and click "Next: Review". You will continue with the confirmation step of the import. In this step you can exclude objects, rename objects if they already exist, and fill in the value of environment variables. When you complete the confirmation step, the objects will be created in the project.

The content of your import ZIP file should have the structure as described below. An example of an import can be found on our GitHub page. Any export you make will automatically follow this structure so that it is easy to import later.